We recently noticed many clients reporting issues with their Windows built in Microsoft VPN Client no longer connecting. The VPN Client displays the message

“Can’t connect to VPN. The L2TP connection attempt failed because the security layer encountered a processing error during initial negotiations with the remote computer”

In the Application event log errors from RasClient with event ID 20227 display a message ending with the text “The error code returned on failure is 789” These are the same symptoms we noted in January from the KB5009543 update.

In our lab we have not confirmed which new update is causing this but many of the computers we have looked at do not have the previous KB5009543 listed as installed, Microsoft may have finally pulled this update that was released in January at this time we can not confirm.

The good news is we have confirmed today in each of the reported cases that Windows Update KB5010342 seems to resolve the VPN client issue. Simply make sure it is installed and the computer has been restarted since and no other changes or steps should be needed. 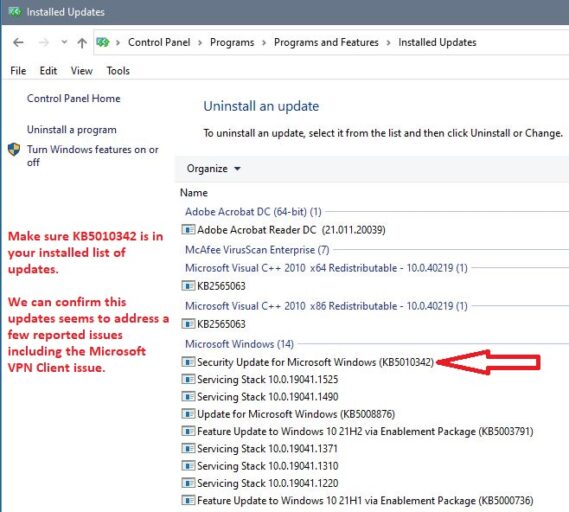